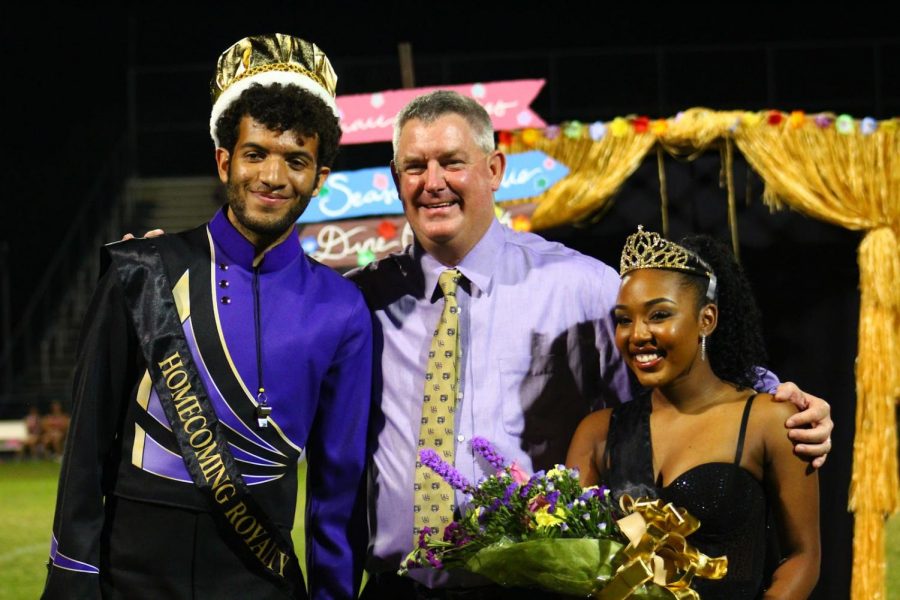 As the homecoming week festivities were coming to a close, the annual homecoming football game against University High School had students all sorts of excited for the moments that lay ahead. Before the game even started the student section was already getting rowdy, showing their love for the Bears players, and the spirit squad set the tone for the crowd with their painted chests that read “GO BEARS!.” The players had prepared all week for this matchup, hoping to get their second win of the season. The game started with the Bears kicking off to the Titans and on their opening drive, they marched down the field and scored. The Bears offense received the ball next but struggled to move the ball and ended up punting it away. After the first quarter, the Titans ended up scoring another touchdown to make the score 14-0.

The second quarter was much like a continuation of the first with the Titans scoring three more touchdowns to push the score to 33-0. Halftime began with the announcement of the Homecoming Queen Mailaya Phillips and King William Ward. The rest of the homecoming court was as follows: Freshmen Jeslyn Diaz, George Franczak, Isabella Mckenzie, and Gia Spinetti. Sophomores Brett Albury, Maddie Smith, Janiya Gordon, and Taylor Rice. Juniors Kristina Dunphy, Hailey Jewett, Jordan Kania, and Alanis Ramirez. Seniors Julianna Accius, Khyle Anderson, Naomi Flowers, Jacob Hogan, Kendall Kurila, Stuart Roosa, Helena Viloria, and Jillian Vinci. The crowd clapped and cheered as their friends and peers soaked in the limelight and received their sashes deeming them homecoming royalty.

As the homecoming excitement died down, the two teams enjoyed the final minutes of their extended halftime and made their way back onto the field. The Bears were hoping to create some offensive production after not being able to score in the first half. Both sides ran the ball for most of the second half to burn off the extra clock. Winter Springs had a few decent drives but were never able to convert them into any points. The final score was 47-0 in favor of University and the Bears now focus on the next few games, trying to get another win before the season ends. Although the Bears took a loss the players were still in high spirits and the students still cheered the team as they trotted off the field. The result of the game is not what the students cared about, it was the fact that their Bears football team took the field every Friday and gave their all for four quarters and that was worthy of praise. The students looked forward to the next day, and the homecoming dance hoping to make great memories with their friends and classmates.