Volcano in La Palma leaves destruction in its wake. 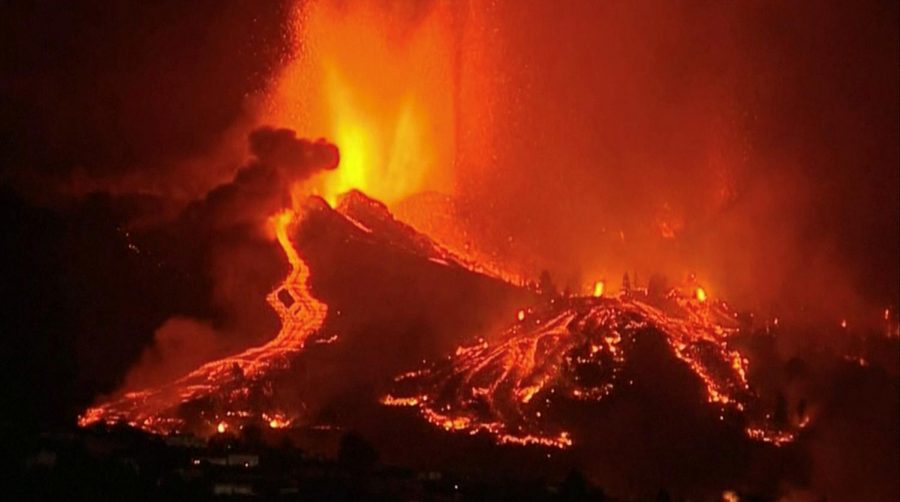 The La Palma Volcano, which is also known as Cumbre Vieja, is one of two main volcanoes on the Canary Islands. On Saturday, September 19 the volcanic vent initially cracked open releasing a “gas-and-ash plume” and triggering a “volcanic tremor recorded by the seismic network” according to the Global Volcanism Program at the Smithsonian.

Furthermore, the Canary Islands depend on the cultivation of canaries and the tourism that brings. CNN states that as of Monday, October 11 “591 hectares (or 1,460 acres) of agricultural land” had been decimated by the Volcano. This destruction will not only impact the economy, but also the people living there. Indiana Today estimates “6,000 residents” were affected by the eruption and had to be evacuated from the area.

While most humans have escaped the island, animals, plants, and property have not been so lucky. Banana plantations, another large part of the economy found in La Palma, are destroyed by the molten magma on its way to the sea. At the same time, animals such as dogs are being rescued through drones in order to evacuate them from dangerous areas. According to the Washington Post, they are doing this by “[using] food as bait and then [scooping] up the canines one by one with a cargo net fit to hold more than 50 pounds”.

Cumbre Vieja’s lava flow reached the ocean at the end of September and the chance for dangerous toxic gases has kept residents in their homes. A resident of the island when interviewed by Reuters said, “This is nature and we have to deal with it, it’s bigger than us.” The devastating effects of this natural disaster will take time to recover from, but as of right now people will continue to find their way through it and persevere.