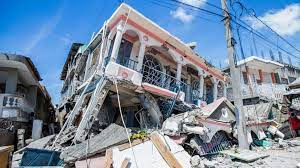 Port-au-Prince, Haitiwas struck with a devastating earthquake that laid the city in ruins. For many of  Haiti’s civilians, their aid and strength comes from their faith in the church.  Many of the churches lay in rubble. Politics aside this is a disaster that deserves more time being discussed on major news sources. Millions are still feeling the heavy impact this earthquake has had on Haiti’s civilians. Tropical storm Grace drenched Haiti with rain after the devastating earthquake. The storm made landfall as people were looking through the rubble for their loved ones.

Each day the death toll rises, and the US has sent aid for those indeed but gangs and other criminals are hijacking the trucks carrying the supplies.  1,4000 people have died and thousands more injured and homes destroyed. France, Spain, and Sweden have offered support and aid to Haiti which is very much needed. The toll following the earthquake, almost 3,000 civilians have died, and at least 52,000 houses destroyed. Haiti’s third largest city Les Cayes was the closest town to the epicenter of the earthquake, causing at least 37,000 houses destroyed.

Many organizations are asking for help Consult websites like Charity Navigator and GiveWell to determine charities’ legitimacy and avoid scams. The Federal Trade Commission also offers these tips for doing research. Margarett Lubin, Haiti’s country representative, spoke on the help and funding to help those in need, “I think the need really in Haiti is the funding.” Lubin continued, “We need the funding on the ground. It’s essential so that we can respond to the need, in the midst of all the emergencies that we just described, so that we can really make an impact on the ground and get people out of suffering.” Many of Haiti’s citizens were left in despair after the trouble ceased.